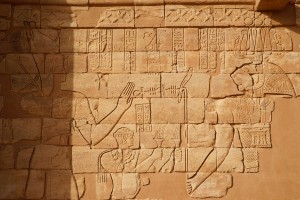 Most standing monuments at Musawwarat, including the unique sacral complex of the Great Enclosure and the famous Lion Temple, date from the Meroitic period (300 BC to 350 AD). But Musawwarat is not only a hallmark of this era. The origins of the site date back to the Napatan period (650 BC to 300 BC).

The Great Hafir is possibly the oldest monument at Musawwarat and was built between the 6th and the 4th century BC according to 14C-dates. The Lion Temple, immediately south of the Great Hafir, is dated to the later 3rd century BC. It was commissioned by the early Meroitic king Arnakhamani as a later addition to the assemblage.

Most extant parts of the Great Enclosure are from the early Meroitic period, i.e. the later 3rd or earlier 2nd centuries BC. But numerous foundations and other architectural remains which underlie the extant structures testify to previous building stages, at least some of which must be of Napatan date.

While many open questions still need to be resolved, it is clear that Musawwarat was the earliest, and for a long time the only, site outside the Nile valley which the Kushites developed into a monumental arena of religious life – current data suggests it may well predate all other sites in the area by several centuries.