The main monument of Musawwarat is the so-called Great Enclosure, which is situated in the centre of the site, immediately west of the main run-off zone of Wadi es-Sufra. The Great Enclosure is an architecturally unique assemblage which comprises three temples, partly erected on artificial terraces, connected by ramps, corridors and passages, and surrounded by huge walled courtyards. The entire complex covers an area of more than 43,000 m2. The Great Enclosure is built from mostly small-sized, sandstone blocks which derive from local quarries, situated in the hills surrounding the site.

As the walls of the Great Enclosure almost completely lack any formal decoration, i.e. reliefs and related in­script­ions, the function of the monument as well as its exact chronological attribution have been widely debated. The first ex­cav­ator, Fritz Hintze, suggested the Great Enclosure to have been a sacral complex and a place of pilgrimage. He thought that its Central Temple, also called Temple 100, which rises on a terrace about 3.5 m above the surrounding ground, was dedicated to Amun-Re.The huge courtyards surrounding the temple would have served to shelter the pilgrims who came from the Nile valley during religious festivals. Later researchers interpreted the Great Enclosureas the Meroitic national shrine, as the main place of worship of the lion god Apedemak, as a palace and a place of investiture of the Meroitic kings, or even as an elephant training camp.

Today, it is widely accepted that the Great Enclosure’s three main building complexes (100, 200, 300) represent temples – however, their dedicatory deities are uncertain. Many of the ancillary rooms have been interpreted in relation to cult activities and the presence of the king during religious ceremonies. Archaeological investigations have revealed that the courtyards east and north of the Central Terrace once contained gardens with carefully laid-out planting beds. One courtyard to the north of the monument contained a pottery workshop which was in use during the 1st centuries BC and AD.

While these findings testify to a continued use of the site, most of the standing walls of the Great Enclosure beong to a building period which has been dated to the early Meroitic period, i.e. the later 3rd and earlier 2nd centuries BC. The founding of the Great Enclosure goes back to the Napatan era, probably to the 6th or 5th centuries BC: Remains of early building periods, including up to three predecessor Central Temples, were deliberately torn down in antiquity to make way for phases of re-building and enlargements. This repeated re-construction is another characteristic of the Great Enclosure which helped shape its labyrinthine appearance as we see it today. Of the older structures often only the foundations remain, as the material from their walls was reused in the new buildings.

Another special feature of the Great Enclosure is the thousands of ancient graffiti – pictorial representations and more rarely inscriptions – which adorn its sandstone walls. They form the largest corpus of graffiti known from the Nile valley. 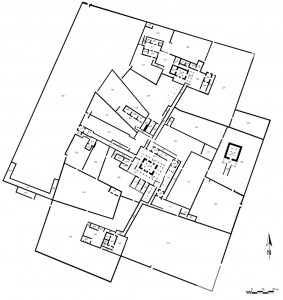 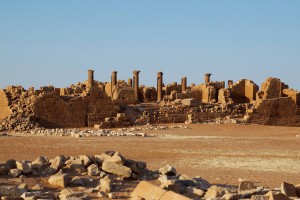 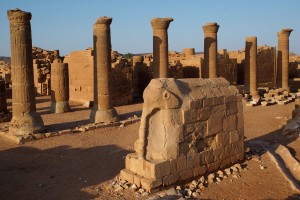 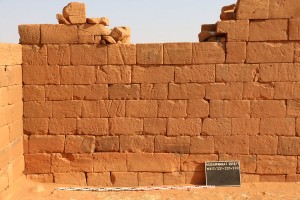