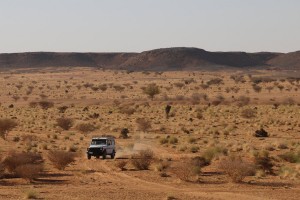 The rather inconspicuous Small Hafir is situated about 200 m north of the Great Enclosure. We can assume that its layout resembles that of the Great Hafir, although its storage capacity was much smaller. The diameter of its basin has been estimated at 100 m. Its embank­ment still stands c. 2 m high.

It has been argued that the construction of at least one hafir must have preceded all other large scale building activities at Musawwarat. The Small Hafir has been considered the most likely candidate for having been the earliest monument at the site, as it could have been built with comparatively little effort and then provided the water for the workforces who constructed the Great Hafir and other structures in the valley. However, new 14C-dates suggest that the Small Hafir is actually younger than the Great Hafir.

Water ducts leading from both the Small and the Great Hafir to the Great Enclosure testify to the use of both reservoirs for the water supply of this monument.